The Most Embarrassing Verse in the Bible 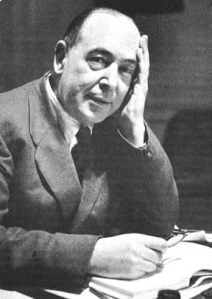 When I was a committed Christian I enjoyed reading the incredibly well-written and absorbing books by CS Lewis. I don’t mean the The Chronicles of Narnia, those classic novels for children, but his theological works. He has rightly been acclaimed as the greatest Christian apologist of the 20th century. My personal favourite is the famous The Screwtape Letters, a satirical novel written as a series of letters from a senior demon Screwtape to his nephew, a junior “tempter” named Wormwood, so as to advise him on methods of securing the damnation of a British gent known only as “the Patient”.

Arguably the most important work of 20th century Christian apologetics is Mere Christianity, in which Lewis tries to avoid denominational controversies in order to explain (what he sees as) the fundamental teachings of Christianity. Remarkably, it seems his work is as popular amongst evangelicals as it is amongst Roman Catholics.

In one significant respect Lewis and I crossed paths, intellectually speaking. Since even before I ‘committed my life to Christ’ I had read the New Testament closely and discovered what Lewis termed “The Most Embarrassing Verse in the Bible”.

Here is his explanation of the problem.

“Say what you like,” we shall be told, “the apocalyptic beliefs of the first Christians have been proved to be false. It is clear from the New Testament that they all expected the Second Coming in their own lifetime. And, worse still, they had a reason, and one which you will find very embarrassing. Their Master had told them so. He shared, and indeed created, their delusion. He said in so many words, ‘this generation shall not pass till all these things be done.’ And he was wrong. He clearly knew no more about the end of the world than anyone else.”

It is certainly the most embarrassing verse in the Bible.

This embarrassing verse nearly stopped me from becoming a born-again Christian, but I put the issue to one side and converted anyway. I was entranced by the idea that God loved me so much that He died for my sins (a mistaken notion I have since renounced).

Let’s look at the passage in more detail as it is found in the earliest Gospel of Mark chapter 13.  Verse 30 is the problem text. Read it yourself in context and ask yourself what it means.

As he came out of the temple, one of his disciples said to him, ‘Look, Teacher, what large stones and what large buildings!’ 2Then Jesus asked him, ‘Do you see these great buildings? Not one stone will be left here upon another; all will be thrown down.’

3 When he was sitting on the Mount of Olives opposite the temple, Peter, James, John, and Andrew asked him privately, 4‘Tell us, when will this be, and what will be the sign that all these things are about to be accomplished?’ 5Then Jesus began to say to them, ‘Beware that no one leads you astray. 6Many will come in my name and say, “I am he!” and they will lead many astray. 7When you hear of wars and rumours of wars, do not be alarmed; this must take place, but the end is still to come. 8For nation will rise against nation, and kingdom against kingdom; there will be earthquakes in various places; there will be famines. This is but the beginning of the birth pangs.

9 ‘As for yourselves, beware; for they will hand you over to councils; and you will be beaten in synagogues; and you will stand before governors and kings because of me, as a testimony to them. 10And the good news must first be proclaimed to all nations. 11When they bring you to trial and hand you over, do not worry beforehand about what you are to say; but say whatever is given you at that time, for it is not you who speak, but the Holy Spirit. 12Brother will betray brother to death, and a father his child, and children will rise against parents and have them put to death;and you will be hated by all because of my name. But the one who endures to the end will be saved.

14 ‘But when you see the desolating sacrilege set up where it ought not to be (let the reader understand), then those in Judea must flee to the mountains; 15someone on the housetop must not go down or enter the house to take anything away; 16someone in the field must not turn back to get a coat. 17Woe to those who are pregnant and to those who are nursing infants in those days! 18Pray that it may not be in winter. 19For in those days there will be suffering, such as has not been from the beginning of the creation that God created until now, no, and never will be. 20And if the Lord had not cut short those days, no one would be saved; but for the sake of the elect, whom he chose, he has cut short those days. 21And if anyone says to you at that time, “Look! Here is the Messiah!” or “Look! There he is!”—do not believe it. 22False messiahs and false prophets will appear and produce signs and omens, to lead astray, if possible, the elect. 23But be alert; I have already told you everything.

The Coming of the Son of Man

24 ‘But in those days, after that suffering,
the sun will be darkened,
and the moon will not give its light,
25 and the stars will be falling from heaven,
and the powers in the heavens will be shaken.
26Then they will see “the Son of Man coming in clouds” with great power and glory. 27Then he will send out the angels, and gather his elect from the four winds, from the ends of the earth to the ends of heaven.

The Lesson of the Fig Tree

The Necessity for Watchfulness

32 ‘But about that day or hour no one knows, neither the angels in heaven, nor the Son, but only the Father. 33Beware, keep alert; for you do not know when the time will come. 34It is like a man going on a journey, when he leaves home and puts his slaves in charge, each with his work, and commands the doorkeeper to be on the watch.35Therefore, keep awake—for you do not know when the master of the house will come, in the evening, or at midnight, or at cockcrow, or at dawn, 36or else he may find you asleep when he comes suddenly. 37And what I say to you I say to all: Keep awake.’

Rev Keith Ward (Professor of Divinity at Oxford University) calls verse 30 ‘a mistake which is so central, so clear and so glaring that it is very hard indeed to deny that it is there.‘ (page 16, A Vision to Pursue SCM Press,1991).

In a disarmingly autobiographical passage (p 17) he writes

‘Various Christians have wriggled and squirmed to evade this point; I have done it myself. But every wiggle and every squirm is strained, implausible and, in the end, deceitful. What the sentence says is plain enough. It is only because we know it is false that we look for some other interpretation, to save the appearance of truth.   So it is suggested that ‘this generation’ means this age (between the birth of Jesus and the end of the world); so it could be as long as you like (as 1 Peter says, ‘A thousand years is as one day to God’). But if you can play with words like that, anything can be true. When Jesus says, ‘Surely I am coming soon‘ in Revelation 22:20, he means ‘Surely I am coming in quite a long time – at least 2000 years.‘ If you can believe that, you can believe anything; things can mean the opposite of what they say.

I can personally confess to much wriggling and squirming on this issue, and it is a sort of comfort to realise that some of the best minds in Christendom have wriggled and squirmed too.

‘It looks very much as though Jesus thought the End was imminent within the lifetime of his own generation (Mark 9.1 pars.; 13:30 pars. – where ‘this generation‘ can only refer to the contemporaries of Jesus).

Page 349, Unity and Diversity in the New Testament: An Inquiry into the Character of Earliest Christianity by James D.G.Dunn, Third Edition, published by SCM Press 2006.

The notorious atheist philosopher Bertrand Russell, in his book Why I Am Not A Christian also argues

“I am concerned with Christ as He appears in the Gospel narrative…He certainly thought that his second coming would occur in clouds of glory before the death of all the people who were living at the time. There are a great many texts that prove…He believed that his coming would happen during the lifetime of many then living. That was the belief of his earlier followers, and it was the basis of a good deal of his moral teaching.”

Over the years, both as a Christian and even today as a Muslim, I like to search out New Testament commentaries by reputable scholars and look up the passage on Mark 13 to see what it says.  If memory serves me right I estimate that over 90% of all the 30 plus commentaries I have read agree that there is a significant error in this passage. Not all scholars attribute the mistake to Jesus however. Some say the erroneous imminent eschatology has been attributed to Jesus by the early church and that Jesus himself taught either an entirely futurist eschatology (date unknown) or that the future age to come was completely realised in his ministry.

As a Muslim I cannot countenance the possibility that a prophet of God could be in error about such a matter, so on a priori theological grounds the error must lie with the gospel writer and the early church rather than Jesus.

But the fact remains, as CS Lewis rightly said, it is The Most Embarrassing Verse in the Bible