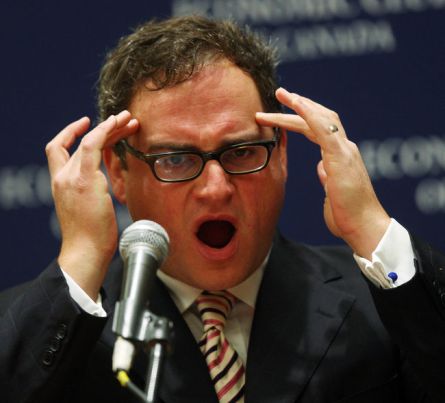 A Sun News Network interview on the “radicalisation of Canadian Muslims,” quickly became a shameful display of ambush journalism; see the above link.  Ryan Doyle, the host of “Straight Talk,” introduced Imam Syed Soharwardy, the founder of the Islamic Supreme Council of Canada (ISCC), and immediately handed over the reins to Sun Media’s resident Islamophobe Ezra Levant.  This type of dishonesty should come as no surprise from a tabloid newspaper that masquerades itself as a respectable cable news network.  Ezra Levant used deception, insults, guilt by association and exhibited immense hypocrisy as he attempted to discredit the Imam, who despite his best attempts, was understandably unprepared for Ezra’s attacks.  Regardless, here is a chronological critique of the “interview:”

While I respect the Imam’s ideological differences with the Salafi Muslim movement, I find it deplorable and self-destructive that anyMuslim scholar would employ right-wing fear-mongering tactics to promote sectarianism.  Perhaps Imam Soharwardy thinks that his Sufi brand of Islam will be safe when right-wing views become even more prevalent in the West.

Right-wing propagandists desperately want people to think that radicalization is a uniquely Muslim phenomenon.  In reality, any society in which hedonism becomes the opiate of the masses, dire social issues are ignored and vitriol bigotry is left unchecked, the following tragedies can and will occur:

The above criminals are all by-products of ailing societies and are often seen that way.  Why are Muslim criminals living in the same dysfunctional societies perceived differently?

Ezra’s first guilt by association attack was when he showed an image of a lone Hezbollah flag at a pro-Palestine rally that both had attended.  When the Imam stated that he never supported Hezbollah, didn’t organize the rally nor flew a Hezbollah flag, Ezra accused him of “taking credit” for the “terrorist rally” and berated him for not “taking down the flag.”  With warped logic like this, is it any wonder that Ezra has found a comfortable home at Sun Media?

Ezra’s second guilt by association attack occurred when he cited a Sheikh Yusuf al-Qaradawi quote on the ISCC’s website.  When Imam Soharwardy clarified that the quote was a religious ruling from a “Salafi scholar” to prove the permissibility of celebrating the Prophet Muhammad (SAW)’s  birthday, Ezra shifted gears and began slandering Sheikh al-Qaradawi by calling him the “spiritual leader of Hamas,”” a terrorist leader,” a “Muslim Brotherhood priest” and a “Hamas Imam.”  For the record, Sheikh al-Qaradawi is not a Salafi nor is he the spiritual leader of Hamas, but it was the late Sheikh Ahmed Yassin, an old man in a wheelchair who was murdered by the Israeli government.  Furthermore, Sheikh al-Qaradawi has said: “The Muslim Brotherhood consider me their Mufti, but I don’t have a relation with the organization.”  Perhaps Sheikh al-Qaradawi should get in line with a growing list of people who are suing Ezra for libel.  It is also worth mentioning that Canada and the USA do not consider the Muslim Brotherhood a “terrorist organization,” but countries run by tyrants and dictators like Egypt, Saudi Arabia and Syria do; Ezra truly picks the strangest of bed fellows.

Since Ezra is so fond of guilt by association, let’s see how he defends himself against the following:

On Sunday, September 11, 2011, Ezra Levant travelled to New York City and spoke at a “freedom rally” organized by the American Freedom Defense Initiative (FDI), aka Stop Islamization of America (SIOA).  This extreme right group was founded by career Islamophobes Pamela Gellar and Robert Spencer who were both denied entry into the UK for spreading hate.   Furthermore, the UK government, Southern Poverty and Law Center (SPLC) and the Anti-Defamation League (ADL) have branded the FDI/SIOA as a hate group.   They also have open ties with the English Defence League (EDL), an anti-Muslim group who have a history of violence, rioting and neo-Nazi sympathies.   This reputation prompted the EDL’s co-founder Tommy Robinson to leave the group in 2013 due to concerns of “far-right extremism.”  As if this wasn’t bad enough, the rally also included the following fanatics:

James Lafferty:  An anti-Muslim activist who said that he is “proud” of attacks against mosques in the USA.

Helen Freedman:  An Associate Justice of the New York State Supreme Court, Executive Director of Americans for a Safe Israel, a rejecter of a Palestinian homeland and supporter of illegal Israeli settlements.

Ilario Pantano:  A former US Marine who murdered two unarmed civilians in Iraq at close range because “… I was going to send a message to these Iraqis and others that when we say, ‘No better friend, No worse enemy,’ we mean it.  I had fired both magazines into the men, hitting them with about 80 percent of my rounds.”

In a July 2011 Toronto Sun article titled: “Whose side is the CBC on?” Ezra called the Jewish Defence League (JDL) a “peaceful  Jewish advocacy group.”  In reality, the JDL is a far-right religious-political militant organization which is banned in Israel and identified as a former terrorist organization by the US government.   However, its sister movements Kach and Kahane Chai are currently banned in Israel, Canada, the EU and the USA.  All of these groups take their inspirational teachings from the late terrorist Rabbi Meir Kahane.  It was his radical teachings that motivated an American-born Israeli terrorist, Baruch Goldstein, to massacre 29 Palestinian Muslims while they prayed in a Hebron mosque.  Meir Weinstein, the founder of the “peaceful” JDL of Canada, commented on this massacre by saying: “Our organization does not condemn the attack.”  The JDL of UK’s website states: “we therefore view Dr. Goldstein as a martyr in Judaism’s protracted struggle against Arab terrorism.   And we will never be ashamed to say that Goldstein was a charter member of the Jewish Defense League.”

At least Imam Soharwardy distanced himself from Hezbollah.

3. No Shariah Law in Canada!

When confronted on a comment that Imam Soharwardy made in the Calgary Herald about Shariah law not being customizable and “for all people of all countries for all times,”  he only owned up to the first part.  When pushed as to whether he wanted to make Canada a Muslim country, he emphatically denied it.  This comment is not only a betrayal of Islamic teachings, but unbecoming of a Muslim scholar.  Islam, like Christianity, is a proselytizing faith that wishes to convert the world.  Any Muslim who doesn’t hope to see all of humanity, including Canada, accept Islam and follow the Shariah is not only showing deficiency in their faith,but disobeying Allah (SWT) and His Messenger (SAW).  Why is it that capitalists, secularists, humanists, feminists, Christians and others can call the world to their way of life but Muslims can’t?  Islam obliges every Muslim to kindly and sincerely invite mankind to Allah (SWT) while understanding that some will reject it.   Ezra and his right-wing friends wish to deceive people into thinking that Muslims must/will use “force” to make people accept Islam.  Canada is a democratic society and if our message resonates with the majority of Canadians, she will become a Muslim nation governed by Shariah law.  If Islamophobes like Ezra have a problem with this, then they have a problem with democracy itself.

Ezra once again quoted from the ISCC’s website which claimed that Christian missionaries were kidnapping Muslim children and exploiting the poor to convert them to Christianity.  While I couldn’t find any direct evidence of this, I did come across a foiled plot by US missionaries, from the New Life Children’s Refuge (NLCR), to abduct 33 Haitian children during the 2010 Haiti earthquake.  Therefore, it is not far-fetched to assume that similar tactics are being employed in Muslim countries.

Furthermore, Christian missionaries have a coined term called the “10/40 window” which is used to describe the geographical areas of the African and Asian continents.  The inhabitants of the 10/40 window are predominantly non-Christian and missionaries who believe that they “must be saved by their Lord Jesus Christ.”  There is much documented evidence of Christian proselytizing in humanitarian crisis zones and anybody who wants to deny this is either lying or naïve.  If their primary concern is to eradicate poverty, then why don’t they fix their respective homelands first?  The Muslim world already has numerous Islamic and non-religious charities working there.  The truth of the matter is that Christianity is on the decline in the West and poverty-stricken people make easy targets.

After unleashing an array of insults at Imam Soharwardy for taking him to the Canadian Human Rights Commission and demanding an apology for censoring his right to free speech, Ezra demanded that the Imam tear down Hezbollah flags at future rallies or leave.  What happened to that freedom of speech he was hypocritically clamouring for?  I guess when the right-wing defends free speech, what they really mean is free speech for themselves only.   He ended the show by claiming that Imam Soharwardy was “from a medieval backwater called Pakistan,”  “not Canadian in anything but name,”  a “Pakistani Medieval thug” and someone who “hate[ed] our liberties.”

In summary, if one were to apply Ezra’s logic on him, wouldn’t that make him a hypocritical, racist, extreme right, terrorist/terrorism sympathizing Zionist thug?

I would like to end with the following advice for Muslims living in the West:

In the short run, we need to physically and financially support institutions like the SPLC, the Council on American-Islamic Relations (CAIR), National Council of Canadian Muslims (NCCM) and set up more parallel human rights organizations to prosecute and bankrupt propagandists like Ezra Levant.  This is precisely what the SPLC did with the Ku Klux Klan (KKK) and it has worked.  Even Ezra is feeling the pinch as he is being forced to seek public donations for his legal defence fund called “Stand with Ezra.”

In the long run, we must learn how to properly give da’wah to our fellow non-Muslims.  While this may sound cliché, the blessed work of Allah (SWT)’s Prophets (AS) is the only viable solution for our prosperous existence in the West.   If we fail to do so, we will certainly be punished by Allah (SWT) at the hands of those we failed to invite.   If we are not inviting people, or are changing Islam to something it isn’t, out of fear of what people will think, then we should remember that Allah (SWT) has more of a right that we should fear Him.  Let’s invite mankind to Islam while making this Prophetic supplication:  “Oh Allah! Forgive my people for they do not know!”