Slide to the Left! 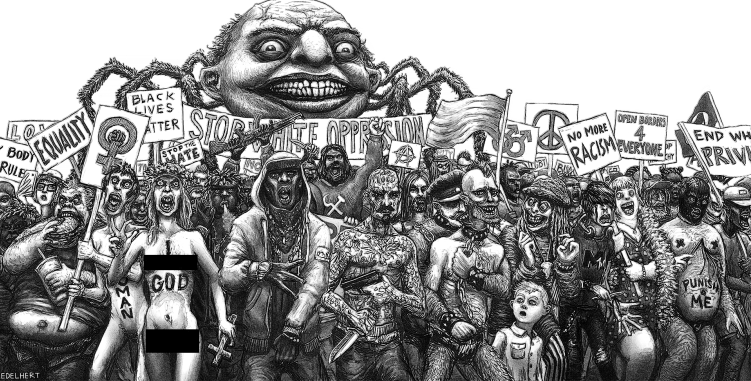 What do most Western universities, schools, education ministries, unions, HR departments, and activist movements have in common? They were the target of infiltration.

“The long march through the institutions”

This was the memorable slogan of infiltration, created by Rudi Dutschke, a New Left activist in the late 1960s. His ideas were influenced by Italian Marxist Antonio Gramsci and the Frankfurt School.

The plan? A violent proletarian revolution was out of the question. Bourgeois capitalism had deluded the proletariat into not rebelling against their “oppression”. The only solution then was to invade the areas of life that were most directly responsible for opinion-forming and the bending of minds: to “work from within” and alter the consciousness of the masses, who would then be made to see the reality of their own situation and become more receptive to the message of revolution.

Comrades of the postmodern New Left would become professors, union officials, journalists, teachers, etc. They would then push a counter culture that resulted in the sexual revolution (free love, homosexuality), the dropping of “bourgeois” subjects from school curricula (Latin, Greek, violin classes), and the introduction of Social Justice Warrior deconstructivism and activism. The long-term goal would be social emancipation from the dominant capitalist Eurocentric heteronormative conservative culture.

Now, the postmodernists are in control of most Western universities, school boards, media conglomerates, publishers, unions, activist groups, advocacy groups, and some political parties. Today, 60% of American professors self-identify as being far-left or liberal; compared to 14% who identify as far-right or conservative. Since the 1980s, the media elite have largely held leftist views on divisive social issues compared to the general public. Hollywood is infamously liberal, and constantly promotes moral decadence.

Thus, the rise of neo-Marxism is not just an accident of scientism. It is an engineered, self-confirming, and self-fulfilling system.

So what do we do?

There is no easy solution to this problem, and any solution will require the collaboration of our greatest minds. This is an information war that has unknowingly destroyed the faith of millions of Muslims. We must all be attentive and constantly seeking guidance from Allah. But there are a few things we must all keep in mind:

1. Our ally is Allah. Allah is our God, our Saviour, and our Deliverer. We must remember to seek His truth, to love what He loves, to hate what He hates, and to put Him first. We do not need to seek allies outside of Allah, His Messenger, and the believers. As long as we stick to our ethics, Allah will give us the ultimate success. We can always dialogue with other groups, and work together towards common goals, but never in a way that will compromise our ethics and change our religion. If we tolerate deviation for the sake of political alliances, then we haven’t truly tasted faith.

2. Recognize the signs when you see them. Know their terminology and jargon. Once you recognize a sign, your antennas should go up, and you should try to understand their goal. You will see the devolution happen very gradually — subtle jabs at our prophets, female imams, queer Muslim characters, a gay nikah, a Muslim comedian who jokes about his drinking, a Buzzfeed video about Muslims doing “ordinary” (i.e. haram) things that non-Muslims can relate to, a shaykh allowing women to marry non-Muslims. You may say to yourself, none of this is a big deal because it doesn’t harm me. But these are actually baby-steps that will throw the baby out with the bathwater once taken to their logical conclusions.

3. Our job as always is amr bil ma`ruf wa nahi `an al-munkar. Remember the People of the Sabbath. There were those who disobeyed God, those who tolerated their disobedience, and those who spoke out against it. Only the third group was saved.

4. Read! Don’t just eat up what your newsfeed, your professors, and your television give you. Follow the money, question everything, and pray for guidance.

5. Remember that Muslims are not just some minority culture in need of Western acceptance. We are not part of this marginal coalition fighting “Islamophobia”. We are doing da`wa — calling to the way of our Lord, with justice, good voice, patience, and in the best manner (16:125). That da`wa will either be accepted or rejected, but Allah will bring about our destinies. We Western Muslims have been put here to either call to Islam or to lose it completely.

6. Raise awareness in the community about the importance of understanding the problems of postmodernism, if they really want to be able to correctly recognize the time that we are and the challenges that we face. Then, we need to continue developing our own distinct worldview, and support leaders in our community who are driving towards that change.

7. We are a people of intellect (aql), patience (sabr), prayer (salat), character (akhlaq), glad tidings and warnings. We must manifest those things at all times.