On Tuesday 4th October 2016, in central london, a panel debate was held on the topic ‘The Great Debate: Does Islam Need Reforming?’ at the Conway hall. The speakers were: Professor Oliver Scharbrodt, Director of the Unviersity of Chester Centre of Islamic Studies Safaruk Chowdhury, Theologian and Academic Professor Robert […]

The video of the debate on Religion and Sexuality is available to watch below. The debate took place on the 17th November 2016 at University of Westminster, London, UK This discussion considered these questions: What happens when we experience friction between our sexuality and our beliefs? How do […] 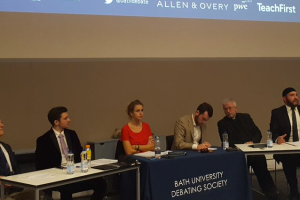 SECULARISATION vs RELIGION DEBATE: Is Religion Still Relevant in the Modern World? [University of Bath, UK]

The video is now available below of the Public Debate on the motion “This House Believes that Religion has become irrelevant in today’s society” which was successfully opposed and defeated after audience voting shifted to the religion-is-relevant to society side. The debate motion was to be decided by the audience voting on […]

Public Debate: “What’s the Point of Believing in God?” [at UCD, Dublin]

The video of the thought provoking Atheism Vs Theism public debate: “What’s the Point of Believing in God?” is now online. The event originally occurred on 13th October 2016, at University College Dublin, Dublin, Republic of Ireland. Speakers: Dr Dan Deasy, Lecturer and Assistant Professor in Philosophy at University […]