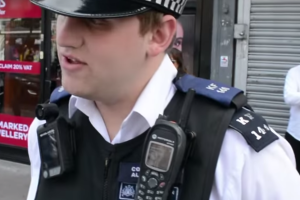 In the UK, Police Officers, while on duty, are permitted to display support to three government approved charities (‘Police Memorial Day’ badges, ‘Royal British Legion Remembrance Day’ poppies and ‘Help for Heroes’ badges and wristbands). The only exception in the UK to this is the Police Service of […]

On the 10th May 2015, the BBC broadcast a pre-recorded program, ‘The Big Questions’ celebrating 800 years of the Magna Carta (an agreement between wealthy Barons and the English Monarchy, to limit his powers). The program’s title for discussion was ‘Has Human Rights Law Achieved more than Religion?’, […]

TV Debate: Should Muslims Participate in Secular Democracy in the West? (Islam Channel)

A friendly and frank discussion and debate upon the question as to whether Muslims should participate in Secular Democracy in the West.

According to staunch feminist Amina Wadud, she claims that ISIS is a “wake-up call” for Muslims who reject a reformation of Islam. Ziba Mir-Hosseini, a Feminist activist and legal anthropologist agrees with Amina, arguing that the existence of ISIS should *force* Muslims to “wake up” to the need […]