PUBLIC DEBATE: Nationalism & Islam, and Muslims in the West

Announcing MDI’s first video completely translated into Turkish: “Islam or Reformation: Which is the way forward?”

Public Motion Debate: Is it wrong not to identify as feminist? (Southampton University, w/ Zara Faris)

Motion Debate: This House Believes in a Secular Society & that Religion Should be Completely Separate from State

On 3rd February 2018, MDI Contributor, Daniel Haqiqatjou participated in a webinar alongside Speakers: Dr. Rafaqat Rashid and Hamza Andreas Tzortzis, on the topics of Seculurism, Atheism, Modernism and the [Islamic] Belief. The full video has been published by Al-Balagh Academy, and is available to watch below.

Reviving the Prophet’s Legacy: Women & the Mosque [by Zara Faris]

On 24th February 2018, at Cheadle Mosque [Manchester, UK], MDI speaker Zara Faris delivered a fascinating lecture on the importance of reviving the Prophet’s [saaw] legacy and Muslim women’s relationship with the mosque. In the lecture, Zara discusses the Islamic viewpoint on women attending mosques from the time […]

MDI contributor Daniel Haqiqatjou, discusses the dangers posed by liberalism and the topics of the call for Secular Reformation of Islam, and the reasons for apostasy by some Muslims who’ve adopted Liberalism. The lecture was held at the Islamic Institute of Houston, 8th March 2018. Br Daniel discusses […] 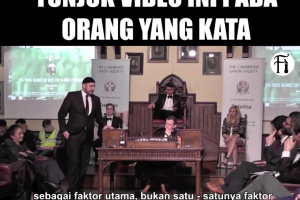 Subscribers to the work of MDI have kindly made a Malaysian subtitled version of the opening speech of MDI’s Abdullah al Andalusi, in his debate winning presentation on the topic ‘Is the West to blame for Islamic Extremism [Terrorism?], which was held on the 23rd April 2015, at the prestigious […]

TV Debate: The New Zealand terror attack- what were the causes and aftermath?

‘How to Respond to Difficult Questions on Islam’ [Q/A by Asadullah Ali, Ohio University, USA]