In the fourth episode of his infographic series ‘iJihad’, MDI contributor, Asadullah Ali deconstructs the arguments of a popular ex-Muslim YouTuber called The Masked Arab. He refutes the notion that ISIS, which practices terrorism and extremism, is alleged to be a manifestation of Islamic teachings.

An Antidote For Extremism 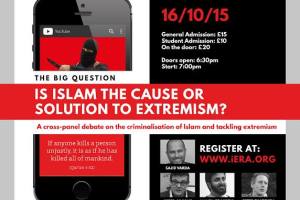 DEBATE Event: Is Islam the Cause or Solution to Extremism? [Friday 16th October 2015, London, UK]

We are pleased to announce an upcoming cross panel debate on the criminalisation of Islam and the proposed Counter-Extremism Bill, taking place on Friday 16th October 2015 in Central London. As part of their ‘Don’t Hate, Debate!’ initiative, the Islamic Education and Research Academy (iERA) will be holding a […]

On May 9th, 2015 I gave a lecture on Liberalism in Muslim Thought at IMEC 2015 in Kuala Lumpur Malaysia. The lecture touched up on some of the basic principles of Liberalism and the three major effects it has on Muslim-majority societies at large: (1) The degradation of […]