New York Times As Khalif Samantar knelt for afternoon prayers at the Eskilstuna Islamic Dawa Center on Christmas Day, he sensed a growing heat and a low, rushing sound coming from a nearby hallway. He focused his mind on the ritual, only to realize seconds later that someone was shouting, […]

International Business Times Sweden’s government is planning to develop a new national strategy to counter the growing prejudice against Islam in the country, according to Alice Bah Kuhnke, Swedish minister of culture and democracy. Kuhnke said at a Stockholm protest rally against the spate of attacks on mosques […] 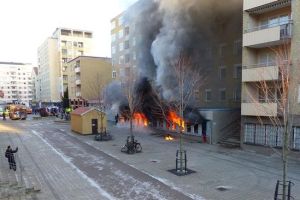 Is this not terrorism? Islamophobia Watch An arsonist set fire to a mosque in central Sweden on Thursday injuring five people, police said, as the country grapples with a political crisis caused by the rise of the extreme right. “Somebody threw an object through a closed window and […]